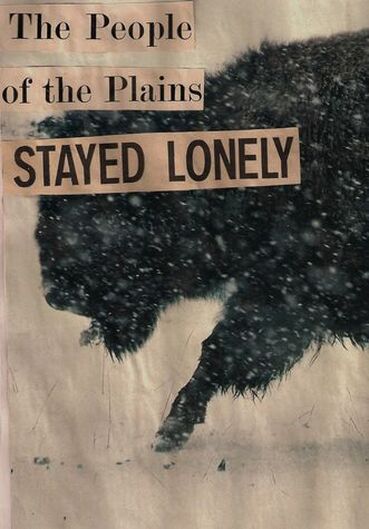 She stood below a looming display of snow cleats. She had opted for the spiked design, perfect for a girl who had always been steadfast in her convictions and was determined to remain that way even in icy conditions.

The cleats she needed were at the top of the rack and there was no display hook anywhere for her to reach them. “Of course not,” she thought to herself, “This isn’t Pamida, people can’t be grabbing things all willy-nilly.” Scheels is for the refined.

“Lewis and Clark!” she swore, stamping her uncleated-foot with impatience which caught the eye of a passing employee.

“Can I help ya with anything?” he asked. He was immediately drawn to her beautiful, firm, round, sturdy boots. Their hands touched as he handed her the items she was after.

“Ope,” they whispered in unison, the color rising on both of their very pale faces.

“Gosh, you’ve barely got any hangnails,” she said. It was unlike her to be this flirtatious, but she couldn’t help but admire his intact knuckles, the unmarred nail-beds.

“Can I interest you in some Carhartt gloves?” he asked.

She immediately called her best friend after making the purchase. In the thralls of elation, she’d forgotten to start her car before heading outside and her excited breath created little clouds that lingered as she explained all about the encounter. Cupid was floating on those clouds.

“Oh ya. We’ve gotta date all set up. Soon as he gets his snow tires put on his truck he’s gonna call and we’ll go somewhere nice.”

Her dating record was full of more duds than a package of firecrackers accidentally left on the dock overnight during a damp 4th of July weekend. There was the Gunderson boy who hardly ever let her talk during their dinner-dates at the Ground Round and hogged all the popcorn. The kid just wouldn’t shut up about his fishing lure collection. The next guy, Jacobson, had an unhealthy obsession with his hunting trophies. She never felt like he’d ever love her unless she was mounted on the wall with eyes permanently and literally glassed over. And that Larson fella liked to spit at passers-by when they were on the Ferris Wheel at the State Fair. She’s not a real mushy person, but romance doesn’t involve guzzling cans of Grain Belt behind the Horse Barn.

But this Knudson guy seemed kinda different. It was early, but his smile made her heart sing louder than the noon siren.

Part 3: The Way the Krumkake Crumbles

She was trying to decide which pair of brown boots she should wear with her leggings when she heard him knock.

His Norwegian sweater outlined by the blue-purple sky that promised snow made for a startling view.

“Now that’s a corn-fed-boy, right there,” she thought her heart threatening to spill out of her chest like a hot-dish casserole in the backseat of a car headed down a road full of potholes.

“Lots of people still have their Christmas lights up. I brought ya a hot chocolate. Whaddya say we drive around and take a look.” He offered his arm to her, even though he knew damn well her cleats wouldn’t let her slip.  They had a warranty.

Still she clung to him, enjoying the solidity of him. He felt reliable, like a landmark on the highway. A strong grain silo. Or the tree.

“I thawed it all out before I got here,” he said.

“You thought what out?” Did he already see their portrait in the church directory, a family in matching flannel and blue jeans, like she did?

“The truck. I thawed it out. Pretty chilly out here. I even turned your seat-warmer on.”

The evening was a whirlwind of red and green lights, a couple of nativity scenes scattered like bowling pins, a particularly intense debate on whether cinnamon is a sin to sprinkle on lefse, and some really solid conversation on the potential for another snow storm soon. Gosh, he really knew how to read a Doppler-radar.

After they pulled up in front of her house, she expected him to lean over, but he suddenly started fiddling with the bottle opener on his keychain.

“That was real nice. I’ll uh. See you later then.”

Her heart sunk faster than your best pair of sunglasses in a murky lake. Her stomach curdled like the last jell-o salad left at the potluck.

“Keedokee then.” she said coldly. Launching herself out of the lifted pickup and stomping up the driveway. Uff-da. What a let down. She felt so lonely all of a sudden. Like how a cricket must feel when he gets stuck in your car on a road trip and when you let him out on the side of the highway he’s suddenly miles away from his other cricket friends. Or all his cricket friends are stuck to the front grille of the car. In short, she felt darn crummy. Who else to turn to now, but Lawrence Welk? She flipped to PBS and watched the bubbles burst.

Suddenly there was a roar of an engine. She ran to the window just to see him jump out of his truck, his John Deere hat slightly askew.

Rushing outside, she was slightly irked that his truck had packed down the snow in her driveway and it’d be a bitch to shovel in the morning. In fact, it’d probably mean a snow-blow job. But none of that mattered now.

“I just got nervous.” he muttered, “You’re like a rhubarb wine at the Pride of Dakota show, kinda sweet, but a little mysterious, and I’m just a plain old Coors Lite guy.”

“Don’t be ridiculous!” she said. He had a twinkle in his eye, like the mural of Teddy Roosevelt in her school’s lunchroom. Gosh. Stop thinking about Teddy Roosevelt right now. Every. Time.

He leaned over and kissed her and she felt a shock of electricity course through her body. No. Wait. That was actual static electricity. It was very dry outside.

He felt her jolt back. “Oh, sorry, I had some Dot’s Pretzels back there while I was thinkin’ things over. I’m sorry. Shoulda had a mint.”

“I’d actually like nothing better than some pretzels right now,” she said. “I have some juneberry wine too, if you’re feeling adventurous, that is.”
​ 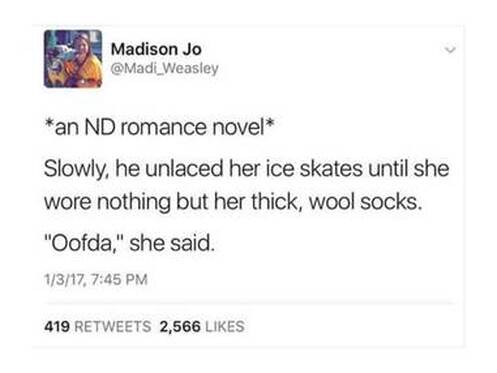 A friend posted the above tweet on my Facebook wall, knowing it'd give me the giggles (I don't know Madison personally, but you should follow her on Twitter. She is a HOOT.). I added a few of my own comments, as seen on the right.

​Somehow the post with my additions went "viral" (some say as far as South Dakota) and I was asked by several people to write a full "North Dakota romance".  I complied. 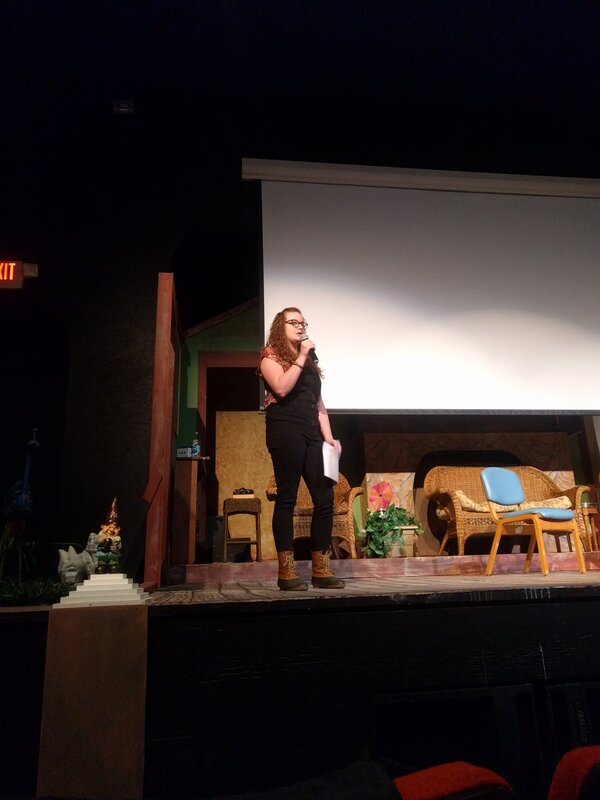